Hunger Games has once again lived up to the hype and returned in a brilliant second instalment.

Leaving off where we ended in the first film, Katniss and Peter are about to leave for their victory tour of the districts after they won the 74th Hunger Games, but trouble is brewing. Katniss defying the Capital has not gone unnoticed in the districts and as she and Peter try to stick to the script and get through it the revolution has already begun.

Those who have read the book will know what to expect in this film because it sticks exactly to the story but maybe, like me, you were wondering “How are they going to do that?”

How are they going to do the clock arena with the many different disasters, from poisonous gas to a giant tidal wave?

They do it and they do it well.

Without giving too much away, the love triangle is still very much alive. With Katniss and Gale’s ‘relationship’ known by Snow, Katniss and Peter are forced to fake it not just to prove their love to the districts but to Snow so he will keep them and their families alive.

And if you hadn’t guessed it yet, there is another Hunger Games. But it’s not just any Hunger Games, it’s a quarter quell which means rules don’t apply. Just when Katniss and Peter think they may be safe they are thrown back into the arena against 22 former Hunger Games victors.

Things are a little different though, now that some of the tributes know who the real enemy is.

This is a must see film. Literally, buy your tickets now. I go to the cinema about three times a year max and this is the one film this year that I was counting down to. And it wasn’t just me. I’ve read the books and I loved it but my boyfriend hasn’t even watched the trailer and he thought it was brilliant too. So whether you know the Hunger Games or not you are bound to enjoy this.

The final book “Mockingjay” is going to be divided into two and the third installement will be out next year with the final the following year. Can’t wait!

Read my review of the first film

Posted by meganchapple on November 25, 2013 in Uncategorized 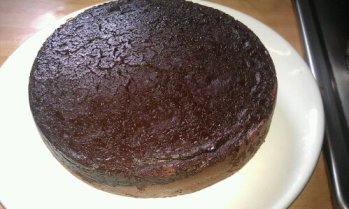 It is summertime which means sun, holidays, festivals and birthdays.

On Sunday it was my boyfriend Tom’s 24th birthday and I baked him a two-layered chocolate cake to celebrate. Then we went out to watch Fast & Furious 6.

Fast & Furious 6 was one hundred percent Tom’s choice of film. He loves cars, car races and action films so Fast & Furious is the perfect film series for him.

For me, however, it is probably the last film I would choose to watch at the cinema. I am not a car fan and fast cars terrify me but it was Tom’s birthday. He made the decision and he even upgraded our seats to D-Box which meant they moved and felt like we were in the cars in the movie.

This did not matter though as the movie is so easy to understand and full of clichés. The thing is, that does not matter with a Fast & Furious movie because people go to see it for the fast cars and the action, and that is exactly what they get.

The Fast & Furious films follow a professional criminal gang led by Dominic Toretto (Vin Diesel). In this movie they are still wanted in America for the various crimes they have committed in the previous films which largely surround underground car racing. This is the first movie which moves away from that. The gang have gone their separate ways, living the dream on their earnings. Former FBI agent Brian O’Conner (Paul Walker) has settled down with Toretto’s sister and started a family and Toretto is enjoying retirement. Then Diplomatic Security Service agent Luke Hobbs (Dwayne Johnson AKA The Rock) shows up on his doorstep but instead of arresting him he wants Toretto to help him. There is a new criminal gang in London lead by Owen Shaw (Luke Evans) and they apparently have Toretto’s dead girlfriend Letty (Michelle Rodriguez) working for them as well. Letty was presumed dead in a previous movie but turns out she was still alive. The only problem is she has amnesia and is on the side of the bad guys.

The hard part for me was not the cars or the racing which I actually quite enjoyed as I got used to the seats throwing me. The hard part was it was an American film set mainly in London and the stereotyping is rife. The Fast and Furious films have been pretty notorious for it in the past and this film was no different. I am British and I can tell you that not once has someone said “All right treacle” to me. If you are British in this movie then you are either a bonehead Vinnie Jones wannabe or a snob who walks around like a fairy. Thank you Hollywood.

Once I had eventually managed to over look the cringe worthy stereotypes, the actual film was very entertaining. Lots of action with plenty of car chases, fight scenes, explosions and moments where The Rock punches someone which is what you are paying for. The finale is particularly brilliant and well worth the wait. Also, remember to wait until the end of the film for an extra piece of the puzzle.I have given the film four stars but it probably would have been three without the D-Box seats.

Next week I will be going to Download Festival so my next post will be in a fortnight. Fingers crossed it doesn’t rain!

Posted by meganchapple on June 3, 2013 in Film reviews

The Woman in Black

I can’t begin to explain how long I have waited for a decent horror movie to grace the big screen once more. For the past few years we’ve had to endure gore after gore after gore. “Saw”, “Final Destination” (3+), even films like the “Human Centipede” which I don’t even class as horror films. They’re so gory they’re either funny or too disturbing to watch.

Finally, someone has taken note of this. Nothing says horror more than a jumpy Victorian ghost story and this is definitely a horror film. Ghost children, foggy marshes, china dolls and a haunted house. Great combination for a truly scary movie. The movie is adapted from the novel by Susan Hill but what people may not know is it was originally adapted for the stage. I’m actually lucky enough to have seen this play on a school trip in London and it terrified me.

“The Woman in Black” is about a solicitor called Arthur Kipps (played by Daniel Radcliff)  who goes to a small village by the coast to sort out the papers of Alice Drablow, a widow who had died a few months ago. Arthur must go as he needs to support his young son whose mother passed away during childbirth. Upon reaching the village he immediately gets the impression he’s not welcome and is almost forced to leave by the villagers. Arthur ignores their warnings and goes to Alice’s home, Eel Marsh House out in the marsh. Whilst at the house he encounters some unexplained noises and whilst peering out of the window sees a woman dressed in black.

Shortly after returning to the village a villagers daughter commits suicide. The villagers continue to warn Arthur about returning to the house, all except Daily the wealthiest man in the village, who doesn’t believe the superstition even though his own son has died from similar mysterious circumstances.

Arthur later discovers upon sifting through more paper work that Alice’s son who had drowned in the marshes was actually her sister Jennet’s son and was placed in her care after Jennet was deemed mentally ill. After the boy dies, Jennet blames her sister and becomes bitter and twisted. After taking her own life, a number of young children in the village begin to die of what seem to be suicides. What is compelling the children to do this and what does the woman in black want? Arthur is determined to solve the mystery especially when his own son may be in danger.

My one fear of this film was not being able to get over the fact that Daniel Radcliff was Arthur Kipps. You immediately associate him with Harry Potter and I have to be honest and say it was a little distracting. Throw into the mix he actually has a son in this film and I got really confused.

There are other familiar faces though. If you watch “Call of the Midwives” you’ll definitely recognise the nanny played by Jessica Raine, who plays main character Jenny Lee in the popular BBC series. Also, Ciarán Hinds who plays Daily has been in a lot of recent films including “Tinker Tailor Soldier Spy”. I think he was probably the best character in the film, not including the woman in black herself.

If you want to see a decent horror movie for once I suggest you go see this movie and try to see it at the theatre as well because it’s well worth it. You’ll never sit in a rocking chair again…

Posted by meganchapple on March 6, 2012 in Film reviews

This modern remake of the 80’s classic will definitely delight young people who have always wanted to see the famous musical on the big screen. Set in New York City, it is the story of a year group of talented, young performers attending a performing arts school in the hope it will make them into stars. It begins with their audition and ends with their final year and follows them as they uncover hidden truths about the real world and the world of fame. The actors are also young and only just entering the world of fame themselves. 19 year old, rising star, Kay Panabaker plays quiet and very naive Jenny Garrison who is trying to break into the world of acting but discovers it’s harder than she thought.

There were many notable performances throughout, especially with the choreography but it was a disappointment in the finale with an anti-climax due to the lack of ideas and weak chemistry between characters.  Despite that though, the main dancer Alice Ellerton played by Kherington Payne was exhilarating and she delivered several amazing performances. The most noticeable performance, however, came from Naturi Naughton who plays Denise Dupree, a classical piano player whose strict father has kept her from doing the one thing she loves, singing. Her incredible vocals was also the main voice of the new remixed  version of the popular theme song “Remember my name”, however, you have to wait till the end credits to hear it.

The characters and their actors are not the only newcomers in the movie. The director, Kevin Tancharoen, is very new to the movie scene having only filmed two MTV series previously entitled “Twentyfourseven” and “Dance life”. It is, however, clear from this film that it is the work of a rookie with his use of graphics and story jumping making the movie appear more like a documentary. One friendly face you may recognise in the film is American Actress Megan Mullally (AKA Karen Walker) star of ‘Will & Grace’ who plays one of the teachers.

Posted by meganchapple on October 7, 2009 in Film reviews